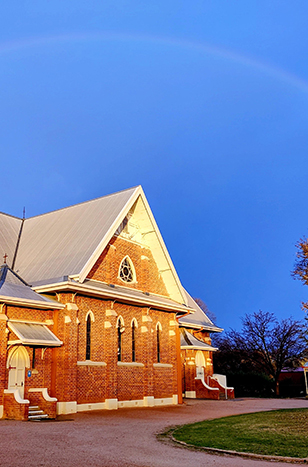 Lutherans have been in Australia for over 175 years. The first Lutherans to arrive were German emigrants from Prussia escaping religious persecution. It wasn’t long before these emigrants established the Lutheran Church in South Australia in 1838. Though this persecution ceased in the mid-1840s, many more Germans followed and established settlements at Klemzig, Hahndorf, Lobethal and the Barossa Valley.

In 1877, missionaries arrived at Hermannsburg in Central Australia to work with local Indigenous communities. They worked hard to preserve Aboriginal culture and languages while also protecting the people from many threats that existed at the time. Today, those missionaries are honoured by Aboriginal Lutherans for the respect, dignity and care they showed.

A brief history of Lutherans in New South Wales and Canberra

There were Germans among the earliest European settlers in New South Wales, certainly from Lutheran families, although it was not until the 1860s that the first congregations were formed and churches built.

German farmers and vine growers at Grafton formed a congregation in 1866, while in Sydney in 1873, a German congregation formed and continues to this day as the German Lutheran Church in Goulburn Street.

The greater number of NSW Lutheran congregations enduring to this day were established in the Riverina in the 1860s. Many Lutheran farmers and their families travelled from South Australia, a six-week journey. The first groups settled around Jindera in 1867 and Walla Walla in 1868. Over the following decades, many congregations and schools were established throughout the Riverina, spreading into north-western NSW.

St Paul’s in central Sydney began around 1915. Apart from the earliest churches, in urban Sydney and Canberra, most Lutheran congregations were formed after World War II in order to serve the thousands of migrants arriving from Europe. St Peters Memorial in Canberra and Concordia Yagoona in south-west Sydney each began in the 1940s, and other urban congregations followed soon after.

Education has always been a priority of Lutheran churches, with several Lutheran primary schools still operating in the Riverina and St Paul’s College, which opened in 1948 at Walla Walla.

The conference centre, Warrambui, is situated just outside the ACT border at Murrumbateman. Built on land purchased by the Lutheran Youth in 1969, Warrambui has always been an important ministry of the District, regularly hosting Synods, retreats and youth events.

Today the Lutheran Church of Australia NSW and ACT District is culturally rich and diverse. This is not only present in our congregations and parishes but also in our schools and aged-care facilities.